A criminal state that must be isolated, boycotted 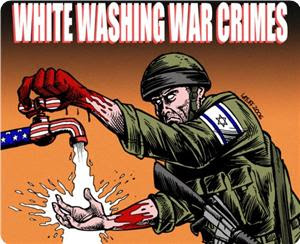 Israel is unusually furious over the publication this week of the Goldstone commission report which accuses the apartheid regime of committing war crimes and crimes against humanity in the Gaza Strip during the bloody blitz against the coastal Palestinian territory nearly nine months ago.

Israeli officials and hasbara doctors have been railing against Goldstone, who is both Jewish and Zionist, to the extent of accusing him of "anti-Semitism," an increasingly stale and ineffective weapon which Israel resorts to when all other propaganda tools don’t work.

Benyamin Netanyahu, the extremist Prime Minister of the Zionist regime has even asked US Special Envoy to the Middle East George Mitchell to assist Israel , especially at the American arena, in order to curb the fallout from the report.

Meanwhile, Israel is embarking on a frantic propaganda campaign to discredit the report. In the past, Israel succeeded in endearing itself to western public opinion by enlisting the often Jewish-controlled media which effectively helped disseminate the Zionist narrative. In so doing, that media often turned the black into white, and the big lie into a "virtual truth" glorified by millions of gullible westerners who wouldn’t overburden themselves with the task of finding out the "real truth."

First of all, Goldstone has, by and large, done a professional job. His report is nearly completely devoid of rhetorical overindulgence and presents facts and as facts without any overly tendentious interpretation.

Hence, the anti-Semitic insinuations made by Israeli hasbara officials should be treated as no more than cheap diversionary tactics aimed at evading the facts. In fact, Goldstone’s own daughter has been quoted by the Israeli press as saying that had her father not been at the helm of the investigating commission, Israel would have been condemned much more harshly.

Second, nearly all credible human rights commissions, including Amnesty International, Human Rights Watch and even Israel’s own B’tselem had more or less reached the same conclusions about the December-January blitz, namely that Israel knowingly and deliberately targeted innocent civilians.

More to the point, numerous Israeli soldiers who participated in the virtually genocidal onslaught on the nearly completely unprotected enclave have testified that they had been instructed to shoot and kill innocent civilians, including people carrying white flags.

As an observer of Israeli behavior for many years, I have no doubt that Israeli leaders realize that they did commit war crimes and crimes against humanity. After all, many Israeli military and political officials are bona fide war criminals who would be thrown immediately behind bars in any country with even minimal adherence to the rules of justice and norms of civility and human decency.

However, these war criminals think, at least privately, that Jews shouldn’t be subject to the same rules of war that apply to other nations. Hence, they don’t view the deliberate collective murder of innocent civilians as "wrong."

Indeed, a few days ago, an Israeli cabinet minister urged the international community to grant Israel a special treatment concerning the conduct of war, presumably one that would allow the Israeli occupation army and paramilitary Jewish terrorists to murder with impunity.

I strongly believe that the international community must adopt a stringent and morally uncompromising stand against Israel . In the final analysis, war crimes and crimes against humanity can’t be treated as diabolic in places like Nazi Germany and the former Yugoslavia while ignored or dismissed as "controversial" when Israel is involved.

This is why, the Goldstone’s commission report’s recommendations ought to be presented to the International Court of Justice in The Hague as soon as possible.

Moreover, civilized nations around the world ought to act on this serious issue of Israeli criminality by treating Israel as a pariah state at least until justice is done and measures are taken to prevent the recurrence of the Nazi-like onslaught.

It is true that Israel is not the former South Africa apartheid regime which was successfully forced to end the apartheid system. However, there is much that can be done to prevent the criminal entity from mocking international law and the basic human rights, including the right to life, of the Palestinian people.

One way of doing this is to compile a comprehensive list of all Israeli war criminals, from private soldiers up to the Minister of Defense, who were involved in the Gaza atrocities.

These suspected war criminals must be arrested upon their arrival in any country. And if there is compelling evidence indicting them, they should be shipped like drugged wild animals to the Hague to face their crimes before an international tribunal. We simply owe it to the unwept victims to pursue their killers and narrow their horizons as much as possible until they are caught and made to pay for their crimes.

The Goldstone report recommended that Israel immediately start a serious investigation into the Gaza war crime. However, it is amply clear that this recommendation carries with it a great deal of naivety, if not hypocrisy. Indeed, one doesn’t have to be an expert on Israel to realize that the Israeli justice system is a virtual rubber stamp in the hands of the military-political establishment.

Besides, it would be foolhardy to expect Israel , a state that has been murdering Palestinians, destroying their homes, and stealing their land from time immemorial, to suddenly grant them justice and morph into a decent state where justice is pursued regardless of the identity of the victim and victimizer.

To be honest, Israel is an irremediable case of oppression and criminality, a state so sick and criminal-minded that it is pointless to appeal to any sense of justice that its military and political leaders might be thought to have.

Two more points I would like to make in this regard. First, it is extremely imperative to hold Israel accountable for these crimes. Because otherwise, if the world allows Israel to get away with impunity, the December-January blitz would look very much an innocuous child play compared with the next genocidal war.

Hence, the world must never ever allow this despicable entity to desensitize whatever semblance of morality the international community still has. More to the point, this issue acquires a special significance because it is no secret that the Palestinians rely for their very physical survival on the goodwill and moral power of the peoples of the world. Hence, the world’s moral conscience must not be allowed to go into even a brief slumber lest the unthinkable happens.

The second point is the totally inadequate manner in which the Palestinian Authority has treated this issue. Indeed, as an entity that claims to represent the Palestinian people, the PA should have spearheaded efforts to expose, incriminate and criminalize Israel .

However, the fact that the PA has only contented itself with a few laconic statements about Israeli responsibility for the war crimes in Gaza underscores the moral and political bankruptcy of the PA regime.

Well, how can the Palestinian people really expect these flamboyant "leaders" who dread calling Israel by its real name to be able to liberate Jerusalem and enable the repatriation of the refugees to their ancestral homeland?
Posted by Unknown at 10:28 AM